DON’T MISS THE JAMBOX FAMILY’S NAKED COWBOY & DANIELLE STAUB ON OPRAH WINFREY’S “WHERE ARE THEY NOW?” 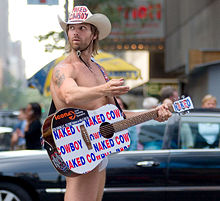 On Oprah Tonight: Straight from the JAMBOX Family, The Naked Cowboy and Danielle Staub Both appearing on “Oprah: Where Are They Now?” airing Sunday, August 10 at 9:00p.m. ET/PT on OWN: Oprah Winfrey Network

Find out where the “infamous” Naked Cowboy, whose eclectic cowpunk / rock album was recorded at JAMBOX Entertainment, is with his life, and also the notorious Danielle Staub, another client of JAMBOX Studios, with an interview on whether she will return for another season of  Real Housewives of New Jersey and other updates with her life.

The Naked Cowboy, who has recorded the album “Year of the Cowboy” at JAMBOX Studios, discusses his arrests while playing in the streets of New York City’s Times Square, and enduring all weather conditions while entertaining millions in only his hat, cowboy boots, underwear, and guitar. Check out this documentary filmed at JAMBOX Studios, courtesy of MTV.