R.e.a.P and B3B3’ are a perfect musical match, who together released Ill Tandem on May 24, 2014. R.e.a.P is an Artist, Songwriter, Producer, and Engineer. B3B3’ (pronounced BAY-BAY) is a Hip Hop artist, Performer and Songwriter. R.e.a.P was inspired by Hip Hop culture and began writing at the age of 18. While B3B3’ started rapping and singing at the age of 14. 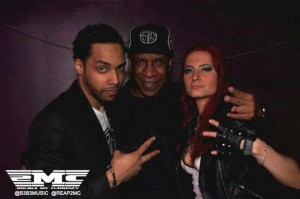 Ill Tandem is a 20 song project with many collaborations. R.e.a.P took part in the Recording, editing, mixing, and producing of the project. It was also recorded and edited by B3B3’, mastered by Lee Evans, and Produced by: Adrian Desmond, Drew Chap, V.I Musik Rayman, Peter Jorge and Ashlee Chanelle.

This mixtape continues to break barriers within the Rock, Hip Hop, Pop, and R&B genres. Recording took place at JAMBOX Entertainment and Mindmic Productions. You can learn more about both of their careers on: http://www.reap2mc.com & http://b3b3music.com/ or by following them on social media.

The songs on Ill Tandem which can be found on datpiff.com are:

“Who needs a heart?” Seems like we’re just trying to understand what love really has to do with it. If you haven’t figured it out here goes. Its all about the fun without the extra emotions. “If you think I’m gonna fall,” for that time that one falls and the other doesn’t. the lyrics speak the brutal truth that there can be a side that doesn’t really care about love. You can’t confuse lust and love, but you always have to say what you mean and mean what you say.
Have I mentioned I did not know I would enjoy the live music, you hear that so rarely.
7. Pain Thief Feat. Rayman (produced by V.I Musik Rayman)

8. I want it
9. Close ur Eyes (produced by V.I Musik)**
“Close your eyes,” and listen “You better get ready.” For all the dreamers that can’t stand to keep their eyes open. “Work for what’s mine… yea, Ima get it.” This big dreamer lets you know that the dreams you see with your eyes closed you have to see when their open as well. Many aren’t ready to see their dreams while their eyes are open. I know I struggle making my dreams become reality. But If I work for what’s mine, I can get it.
10. Gansta remix**
“So you a gansta, huh?” Yes, they just threw a little spanish curveball at you. “A mi no me ayuda nadie,” No one helps me so why are you pressuring me? This is for everyone who said they were big and bad and could affect you. “Lo hago todo sola” I do everything by myself so why do I need your help? I say everyone who has ever put us down or tried “helping” (not the real helpers) should take this and understand that we don’t think they’re anyone important.
11. Lights on
12. Graveyard shift
13. Everyday I grind (produced by Peter Jorge)
14. Turn down for what remix
15. Partition remix**
Beyonce + B3B3’ + R.e.a.P = “took 45 minutes to get all dressed up,.” it’s officially time to “Turn UP.” If people thought Beyonce was explicit they aren’t ready for this. There is nothing wrong with letting others know what exactly you want. B3B3’ is done and getting to the point; she doesn’t want any more talking. And R.e.a.P doesn’t hold back either and let’s you know what’s going down when that partition goes up. *Covers ears*
16. Forever Hold you down (produced by Ashlee Chanelle)

17. Unity feat Shana May**
“We need unity… Peace, Love, Unity.” If you couldn’t figure out where to start, start by uniting everyone. The lyrics try to reach out to the world and stop discrimination. Instead of judging each other because of our different point of views we can come together to bring peace and love to this world. Get people to live and stop speaking on how they can bring change without acting on their words, “Actions speak louder than words.” “We need more of this, Love, peace and all that,” start giving a little more to those around you and create real change.
18. Fly Remix
19. We are young remix
20. Airplanes remix
21. Runaway remix

I’ll give you this warning, this mixtape is Great. Go check it out for yourself, now.