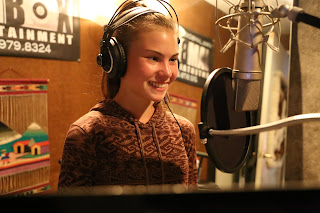 JAMBOX Entertainment Studios has worked with many talented artists over the years. At the age of fourteen years old, Emily Koziarz also known, “Em K” is no exception to the amount of talent she possesses. Since starting at JAMBOX Artist Boot camp program at the age of eleven years old, this singing sensation has had the opportunity to showcase her vocal talents at the prestigious Madison Square Garden in NYC. She sang the national anthem for New York City’s woman’s basketball team on live television. She even got to sing at one most beloved arena’s across the world, Yankee Stadium.

This inspirational 14-year-old artist has an intriguing YouTube channel and cover videos that, some of which had peaked over 100,000 views worldwide. She has done fantastic cover videos such as “Landslide” by Stevie Nicks and Lady Gaga “You and I” with her fellow JAMBOX Boot camp Artist team Sami Love, and Ricardo. Lee Evans loves the amount of dedication she is putting in her music.

She shows no signs of slowing down by releasing her debut-hit “ My Way” produced and co-written by our very own Lead engineer at JAMBOX Entertainment Studios, Alex Gourmas. Her overall message of her debut-hit is to encourage people to follow their own path in life. Em k is currently heading to Hollywood Records in California to work on her next hit with producer, Mher. Since joining JAMBOX Entertainment Studios family at young age, this artist is definitely going to impact the world with her music. To check out more of “Em k” covers and music, click on her soundcloud link below:

For more JAMBOX Entertainment Studios updates and information check out our links below: