Lisa Fitzpatrick Lisa Fitzpatrick.com is Ireland’s most loved Fashion Stylist, Author, TV Presenter and Radio Broadcaster. She appears regularly on television here in Ireland with TV3 on Ireland Am and Xpose and in the UK on ITV’S This Morning sharing her fashion tips and style advice. On TV Lisa is well known for her honest style reviews reporting on events such as The Golden Globes and The Grammys.

One of Lisa’s biggest accomplishments was her weight loss. She went from a size 20 and over 210 lbs to the sultry stylish woman she is now

Lisa won VIP Best Dressed Woman of The Year Award in 2007 voted by the Irish public. She hosted Miss Universe Ireland 2012-2013 and judged Miss Ireland Competitions from 2007-2010. Lisa was Lexus ambassador with Brian O’Driscoll (Ireland’s rugby captain from 2008-2013).
She was Viviscal Ambassador for Ireland from April 2007 until September 2011 and Lexus ambassador with Brian O’ Driscoll Ireland’s rugby captain from 2008-2013. Currently Lisa is Patron for the Baby Max Wings of Love Charity.

Lisa has also become a fashion presenter with ITV which started summer 2013 on the ‘This Morning’ programme. Lisa judges Oasis ‘Search for a Stylist’ with tv3 for the last three years and as a judge for Oasis in ‘Search for a Designer 2013′.

In print media, she wrote a weekly column “Lisa Meets …..” for the Evening Herald. Now soon to be released, Lisa’s second book has finished editing stages with Kyle Cathy UK publishers and will hit shelves May 2014. Lisa has appeared on the cover of the following magazines:-

Lisa was just supposed to be a music loving gal coming to JAMBOX to try our GIFT OF SONG Service  with her Family .… who’d’ve thought??? But, we love it when awesome people like Lisa come thru! 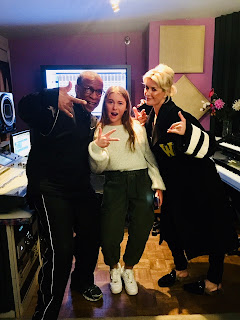