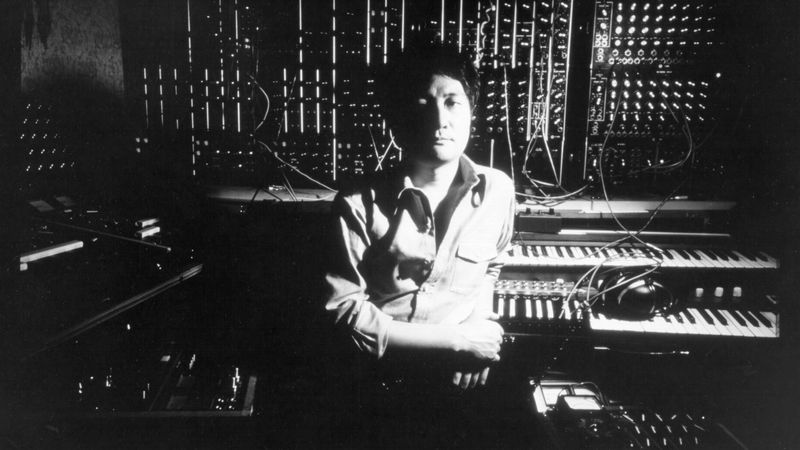 I happened to see Isao Tomita in concert in Battery Park NYC. I stumbled upon this free concert one night after leaving my midtown NYC recording studio.  It was given on the water. There was a full orchestra on a boat it looked like it could’ve been a Staten Island ferry . A huge sound system was set up. All seemed to be controlled by a hovering spacecraft. There were great musicians, solos pieces and dancers, amazing fireworks, and the mysterious space craft. Holst The Planets, Claude Debussy pieces and more were played by Tomita (and the orchestra). Such an amazing show, way way ahead of it’s time. I’ve never seen anything like it since. I was a devout Tomita fan after that night. Rushed out to find his music and as much history as possible. I purchased these albums:

Now you can find excerpts of this amazing concert with celebs like Stevie Wonder and Michael Jackson, and a Japanese children’s choir on YouTube.

As far as his music, You really appreciate it whin you realize that at that time in the 70’s modular synths were monophonic for the most part. So Tomita had to submix and bounce tracks to create his magic. Digital music, computers abd copy and paste were not yet part the human lingo.

Tomita was a true visionary. May he rest in peace.

For more JAMBOX Entertainment news and updates follow us:

Here is some info I found on another blog post

TOKYO — Over the years, relatively few Japanese musicians have found global fame. One might argue that this is because Japanese sensibilities toward sound and music are unique, but the ones who embrace this uniqueness and pursue their craft with a limitless curiosity can make the leap from the domestic to the world stage.

Isao Tomita, who died on May 5 at the age of 84, was one such musician. Unrivaled as a composer, synthesizer player and acoustic engineer, he spent his life as a “seeker of sound,” crossing boundaries with ease.

His interest in acoustics began when he visited the echo wall, an architectural feature with unique acoustical properties, at the Temple of Heaven in Beijing, where he spent part of his childhood.

Tomita focused on surround sound and other 3-D audio effects from early in his professional career. This eventually evolved into “Sound Cloud” events, in which the audience was surrounded by sound from all directions.

Japanese record labels were reluctant to release Tomita’s first synthesizer album, “Clair de Lune,” an arrangement of Claude Debussy’s piano pieces, because they had no idea which category to put it in. U.S. label RCA took notice of his work and released the album under the title “Snowflakes are Dancing” in 1974. For this album, Tomita became the first Japanese musician to be nominated in four categories at the Grammy Awards.

In his later years, Tomita returned to his roots. “Symphony Ihatov” is a musical interpretation of the world of novelist and poet Kenji Miyazawa, an early source of inspiration for Tomita. When the symphony was performed in Beijing, he revisited the echo wall, the point where his lifelong pursuit started.

At the time of his unexpected death, Tomita had finished composing the basic structure of “Dr. Coppelius.” Combining music, ballet and visual effects, “Dr. Coppelius” is not only the culmination of his own life’s work, it is also the realization of the dream of the late Hideo Itokawa, a pioneering Japanese rocket engineer and amateur ballet dancer whom Tomita revered. “Dr. Coppelius” will be completed by another composer, like Mozart’s Requiem, and is slated to premier this autumn.

Atsufumi Suzuki is a music critic.